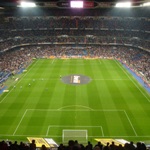 A football dream come true! El Classico between rivals Real Madrid and Barcelona, at the Bernaneu, is probably the biggest game in club football.

I’ve been to the Nou Camp in Barcelona, albeit to an empty stadium. I was then fortunate enough to visit the Mestalla, when Valencia entertained Real Madrid. Whilst collecting the tickets, a lack of security enabled us to go pitch-side. Surprising highlights included running out of the players tunnel and grabbing a tiny amount of grass from the side of the pitch. No doubt 80,000 at the Estadio Santiago Bernabeu for El Classico was going to raise the bar even further.

Tickets for the game were sold out within 10 minutes from going on sale. Therefore, we arrived in Madrid with little hope of seeing the game. With a few touts hanging around the stadium, my friends managed to secure three tickets. The main downside was that the seats were in different parts of the stadium. A couple of tickets in the 1st tier in the South Stand and a ticket in the 4th tier of the North Stand. Slightly more concerning was the actual quality of the tickets, looking like cheap colour print-outs on poor glossy paper.

There was a nice buzz walking towards the Bernabeu, but it was hard to feel excited, as we feared the tickets may have been fakes. After splitting up, I walked around half the stadium until I found Torre D. It turn out to be one of four huge towers, similar to those at the Mestalla. Up the initial steps, past security and inserted the ticket into the machine. Thankfully, or maybe miraculously, it came out the other side and I was allowed in!

The bird-eye view itself was right behind the goal. Absolutely, perfect for anyone interested in the strategy of the game. To be fair, whilst it was difficult to see any expressions on the players faces, it was a great view. With the Barcelona fans chanting to my left and the Real Madrid fans berating them, Nessun Dorma (see video below) was played into the stadium. It was an incredible 3 mins that will live with me forever.

The match itself had moments of brilliance, but overall it was a disappointing affair. Barcelona controlled the play throughout, whereas Real Madrid were hoping for something to happen. Both teams passed the ball around, at times trying to out-trick each other. But there was only going to be one winner. Barcelona moved around the pitch so well, it was almost like watching the Harlem Globetrotters of Football.

The breakthrough came in the 33rd minute. After a quality one-two with Xavi, Lionel Messi chested the ball down, before slotting the ball past Iker Casillas. Real Madrid seemed devout of any quality ideas, long before Xavi opened up the defence again in the 56th minute, with Pedro running on and eventually placing the ball past the now frustrated Casillas.

With all the subs on, the home side’s effort increased, but Barcelona held on. In the last few minutes, with defeat on the cards, late tackles by the Real Madrid players seemed the only way they could get one up on their opponents. Ronaldo was off the pace and Kaka may have made a difference had he played. However, Barcelona came to the Bernabeu with a point to prove, passing the ball, creating chances and ultimately finishing those opportunities. Real Madrid, given another 90 minutes, were unlikely to break down the away side’s defence. Hats off to Pep Guardiola for a great game plan.

There is no doubt though that El Classico was an absolutely fabulous experience!