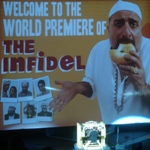 The premiere of The Infidel at the Hammersmith Apollo was next on the agenda. Judging by the comments on Twitter, many faces from the world of film and comedy were expected to support the event.

I’ve no idea why I’d expected the night to follow in the same vain as previous events at the Apollo. Basically, arrive, take your seat, watch the show, leave. The hundreds of people outside the venue, along with camera crews, photographers and the infamous red carpet meant it would be a challenge just to make it inside.

Walking towards the red carpet, any old school Grange Hill fans would have had huge smiles on their faces as Todd Carty was spotted having his photo taken. A quick glance across and the real stars of the film could be seen, director David Baddiel and lead actor Omid Djalili.

A friend from Piraeus commented on what how orderly everyone was queuing to get inside the Apollo. With no real guidance, a long bendy line was formed around the venue, whereas in Greece there would simply be a large semi-circle formation squashed outside the main door.

There was a rush to get inside now, as the tannoy kept repeating the performance was to start in 1 minute. The strange thing about that line, was that it was repeated about 7 times, every 2 minutes. Eventually he’d given up. Loud applause followed, but it wasn’t quite clear why. Then the penny dropped, as the organist slowly disappeared through the stage, meaning that something was about to finally happen.

David Baddiel than entered the stage to the relief of the audience. To be fair he was apologetic for the long wait and more so when he explained that the film scheduled to be shown at 7pm, was to begin after few stand-up routines and talks from members of the film’s production team. It was a requirement by the venue, of course to sell more alcohol during the interval. I guess only Billy Connolly can get away with having a 2 1/2 hour show without an interval at the Apollo.

Whilst the delays may have annoyed a few in the audience, I enjoyed hearing David Baddiel explain how the idea of the film came into fruition. Omid also provided a hilarious stand-up routine, as did the two winners of the Funniest Religion competition. Names were dropped as to who else was in the audience, most notably long time friend Frank Skinner and music legend Billy Ocean. Among others, Jo Brand, Jimmy Mistry and Hardeep Singh Kohli were in attendance.

There was an excellent response to comedian Imran Yusuf’s Funniest Religion video. I’d seen it before on YouTube, but nevertheless, it was fun just seeing the reaction of the audience as they seemed unsure what to make of it at first. Then there were roars of laughter from the mixed Muslim, Jewish, Christian and Atheist audience midway through the Britain’s Got Talent parody.

The film itself was based around Omid Djilili [a real life avid Chelsea fan] playing a Muslim, following Spurs, who happens to find out he was born a Jew. A superb cast, with an intriguing storyline made for a really good film. There are too many hilarious moments to mention, from the unfortunate political demonstrations to the uncomfortable family get-togethers. The film went down very well with all sections of the audience.

If there was a single disappointment, it was probably the ending, but I’ve racked my brain and realised it’s not easy to finish a film when the subject is so controversial. The same can be said for the very funny You Don’t Mess with the Zohan.

Above all, the film shows that it’s ignorance that forces people apart, extremists that maintain this separation and moderates from all sides that need to close these divisions. Moreover, people have so much more in common with their ‘neighbours’ than what is either perceived or portayed. Maybe along with distributing The Infidel around the world, it would have been an idea to record the diverse audience, showing people of different nationalities, cultures and religions, sat alongside each other, laughing together, all under the same roof. A peaceful experience, in a complex world.