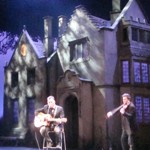 A tweet from a friend made for a convincing argument to see Stewart Lee. Luckily there were still a few tickets available at the National Theatre.

I was in two minds about booking an event on April 6th and/or April 7th as it coincides with a really sad period in my life. But 4 years on, it was obvious my mother would have rather I was out having fun, rather than staying in reflecting at her loss. I offered a spare ticket to the venue to either sell or give away and surprisingly, as it was more likely to sell 2 tickets next to each other, I was given a single ticket in a prime location.

The National Theatre itself is an impressive venue, as was Stewart Lee’s entrance onto the stage. Impressive in terms of how many times, he walked on and off until he felt he’d nailed it. The smoke didn’t help, nor did the incorrect round of applause, or even the huge house on stage. I knew from that moment the show was going to be exceptional.

Stewart Lee had the audience in the palm of his hands. At times, simply remaining silent on stage still provoked as many laughs as during his cleverly orchestrated storytelling. Cafe Nero received a well-deserved ear bashing, as they stupidly implied he’d fraudulently marked the middle section of his loyalty card.

‘Observational’ Michael McIntyre and ‘enraged’ Frankie Boyle were not to be spared. Especially the latter, as he’d commented that after the age of 40, comedians should retire as they’re no longer angry. At 42, Stewart Lee begged to differ and ‘mocked’ the comedian for the feeling angry about the Queen’s private parts. Furthermore, explaining that the topic barely came up in conversation, even during the periods in his life when he was supposed to be at his angriest.

The Top Gear team were slaughtered and rightly so. Jeremy Clarkson’s continued politically incorrect comments, especially the nasty remarks about Gordon Brown’s disability, were ripped apart by the comedian. However, it was the bigot’s sidekick that faced the wrath of Stewart Lee. Richard Hammond sitting back giggling at the bully’s comments, riles Lee more than anything else. Apparently, just by saying ‘it was a joke’ after any slur was meant to be ok. In return, the now very angry comic wished unpleasant ‘incidents’ on Clarkson’s children, and of course the Hamster too (who is not a real Hamster). The audience were split and unsure whether or not to laugh. But once Stewart Lee cried out ‘it was a joke’, the rest roared with laughter, exposing the very nature of the humour in question.

Whilst ranting, Stewart Lee even made his way around the auditorium, climbing up into areas that most people would have required a ladder to get to or at the very least a helping hand. It was an amazing feat in itself, made more impressive by the fact routine continued throughout. There was even time for a song at the end.

An absolutely sensational performance from a comedian that has obviously mastered his profession. I even got the chance to have a brief chat with Stewart Lee at his book [DVD] signing after the show and he was very friendly. Then again, I did my best not to annoy him, because even in his 40s, he can get a tiny bit angry. An outstanding show, not to be missed. But if you have, make sure you get the DVD!