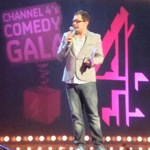 The Channel 4 Comedy Gala, in aid of Great Ormond Street Hospital, brought together an unprecedented wealth of talent from the world of comedy and beyond.

The O2 was packed out, in anticipation of ‘a 3 hour comedy relay’. Each comedian appearing for this worthy cause had approximately 3-5 minutes on stage, performing a mixture of old and new material. With a great view near the stage, Stomp kicked off the show rolling out Alan Carr from one of their dustbins. After warming-up the audience, the comedy baton was passed to Jason Manford, Jo Brand and Sean Lock.

Jonathon Ross then took over presenting duties, introducing Kevin Bishop and Patrick Kielty. After a short video message from Ricky Gervais, Wossy managed to convince the audience to shout out the C word in unison. I wonder if that will make the DVD cut. Rob Brydon and Gok Wan followed, with a pre-recorded Kevin Bishop routine, before introducing Andy Parsons and Mark Watson.

A few boos as Katie Price and Alex Reid entered the stage, soon turned to cheers as they introduced Michael McIntyre, who was subsequently chased off stage as he mimmicked the cage fighter. After a short interval, Bill Bailey accompanied by Kevin Eldon, performed a superb musical routine.

The mis-matched Christine Blakely and Facejacker’s Terry Tibbs eventually paved the way for Jack Dee. He humourously destroyed many of the performers backstage, before announcing Shappi Khorsandi onto the stage. The adorable Catherine Tate’s Nan joined in with the action, before introducing Noel Fielding. James Corden’s Smithy and Ruth Jones’s Nessa were up next before passing the baton to John Bishop.

David Mitchell took over presenting duties, in advance of the appearances of Jack Whitehall and Rich Hall. The comedy finale featured Jack Dee welcoming Lee Evans onto the stage. At the end of his performance, Jack Dee gave Lee Evans a Channel 4 award for outstanding comedy. He accepted it and immediately put it up for auction, with one member of the audience offering £5,000.

It was a superb night of relentless comedy, with a long-list of exceptional performances. The Channel 4 Comedy Gala was an outstanding success, raising over £800,000 for Great Ormond Street Hospital. A big thank you goes out to everyone involved on putting together such a great event.