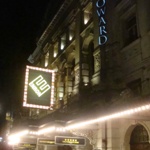 With the fraudulent activity, and subsequent collapse, of telecoms giant WorldCom having such a destructive impact on my business, it was fitting to catch a play on energy goliath Enron’s colossal scam.

I hadn’t seen a play since childhood, primarily because I’ve never really been a fan of ‘over-acting’. But considering the subject matter, the comedy style and the rave reviews, I was really looking forward this. Arrived just in time to take our seats in the impressive Noel Coward Theatre.

Enron was superbly performed with a clever mix of music and comedy. The first half was a complete joy, with everyone on a massive high during the super-quick rise of the company. With extremely questionable accounting techniques to trading fictitious energy resources, Enron established itself as one of the world’s most powerful players in the energy market.

But what goes up, must come down, especially if unscrupulous behaviour can no longer sustain all ‘the lies’. Laughs were turned to sighs, as the details unfolded in the second half. The management’s reluctance to come clean, whilst at the same time perpetuating the lies, made it one of the most shameful episodes in corporate history. The Enron deceit was exposed and the so-called giant collapsed.

The result is that history will show Enron as one of Corporate America’s biggest fraudulent cases. Thousands of people lost their life-savings, which of course could have been avoided, had the ‘advice’ not been to keep the shares in the ‘successful’ company. Enron, the play itself, was exciting, humourous and great entertainment. A superb achievement, for one of the darkest days in the pursuit of capitalism.